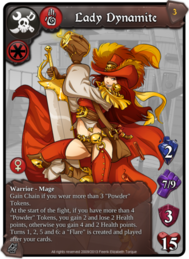 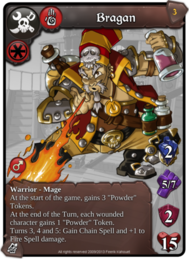 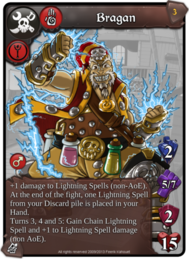 Lady Dynamite. (3 evolutions in all). On its last evolution : Uncommon. Pirates. Warrior, Mage. Human. Spirit 2. Attack 7/9. Defense 3. Health points 15. Gain Chain if you wear more than 3 “Powder” Tokens. At the start of the fight, if you have more than 4 “Powder” Tokens, you gain 2 and lose 2 Health points, otherwise you gain 4 and 2 Health points. Turns 1, 2, 5 and 6: a “Flare” is created and played after your cards.

Flare. Rare. Fire. Pirates. Mage. Permanent. At the end of your fight, you suffer 1 direct damage point. If you die, one opposing character suffers 1 to 2 magic damage points for every “Powder” Tokens attached to you (maximum 14)

Dominate the Opponent. Common. Action. Pirates. If your character wears more Items than your Opponent, the latter has Attack -3. Sacrifice 2: You lose up to 7 “Powder” Tokens and gain Attack +1 for each token lost that way. Chain.

Outrage. Common. Action. Pirates. Your character permanently gains your other characters’ races. Attack +1 for each Powder Weapon attached to your character. At the end of the fight, the two characters in battle gain 2 “Powder” Tokens. Chain.

Teamwork. Common. Action. Pirates. Your character gains your other characters’ Defense bonuses and penalties for the duration this turn. Marauder: Sacrifice 1: Choose an out-of-combat character, he has Defense -X where X equals his Printed Defense + his Spirit. Chain Item.