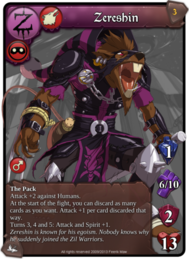 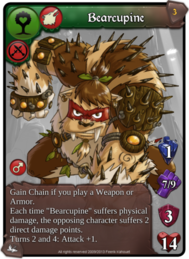 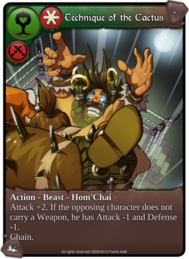 Zereshin. (3 evolutions in all). On its last evolution : Common. Zil Warriors. Marauder. Beast. La Meute. Spirit 1. Attack 6/10. Defense 2. Health points 13. Attack +2 against Humans. At the start of the fight, you can discard as many cards as you want. Attack +1 per card discarded that way. Turns 3, 4 and 5: Attack and Spirit +1.

Agonda shell. Rare. Armor. Sap Heart. Warrior. Defense +2. Permanent. At the start of the fight, if your character has a Two Handed weapon, Attack +2 and Defense +2 this turn. Chain Weapon.

Technique of the Cactus . Common. Action. Sap Heart. Warrior. Beast. Hom’Chai. Attack +2. If the opposing character does not carry a Weapon, he has Attack -1 and Defense -1. Chain.