iTCG: Card Release: Back to the origin

To celebrate the arrival of our new Shadow Marauder, we propose you this week a pre-builded Deck that will allow you to try a new playing style, obtaining some cards of the week. Come to discover until Sunday 18th August at 8 PM (French time) the deck “Dagger Master” for only 999 Fee’z.

Moreover, the re-edited cards of the week are Weapons at will and Taichi sword. 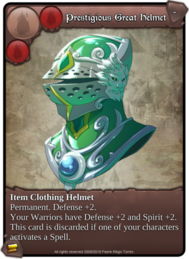 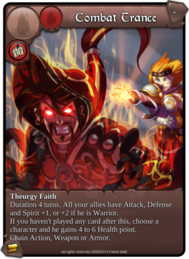 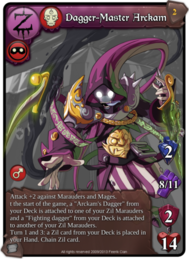 Combat Trance. Rare. Faith. Priest. Duration 4 turns. All your allies have Attack, Defense and Spirit +1, or +2 if he is Warrior. If you haven’t played any card after this, choose a character and he gains 4 to 6 Health point. Chain Action, Weapon or Armor.

Prestigious Great Helmet. Rare. Item of Clothing. Permanent. Only one sample per character. Defense +2. Your Warriors have Defense +2 and Spirit +2. This card is discarded if one of your characters activate a Spell.

Given word. Uncommon. Action. Pirates. Marauder. Attack -8. Choose one of yours Marauders, your opponent suffers a physical attack that equals his Attack, +3 if he holds a “Narwhal”

Imperial Guard Armor. Common. Armor. Kotoba. Warrior. Permanent. Defense +4. If a Weapon is active, a playable One Handed Kotoba Weapon from your Discard Pile is played. Chain One Handed Sword.

Taichi sword . Common. Sword. Kotoba. Warrior. This card activates after the fight. Permanent. Attack +3 and Defense -1. At the end of your fights, your opponent suffers 2 to 3 direct damage points.